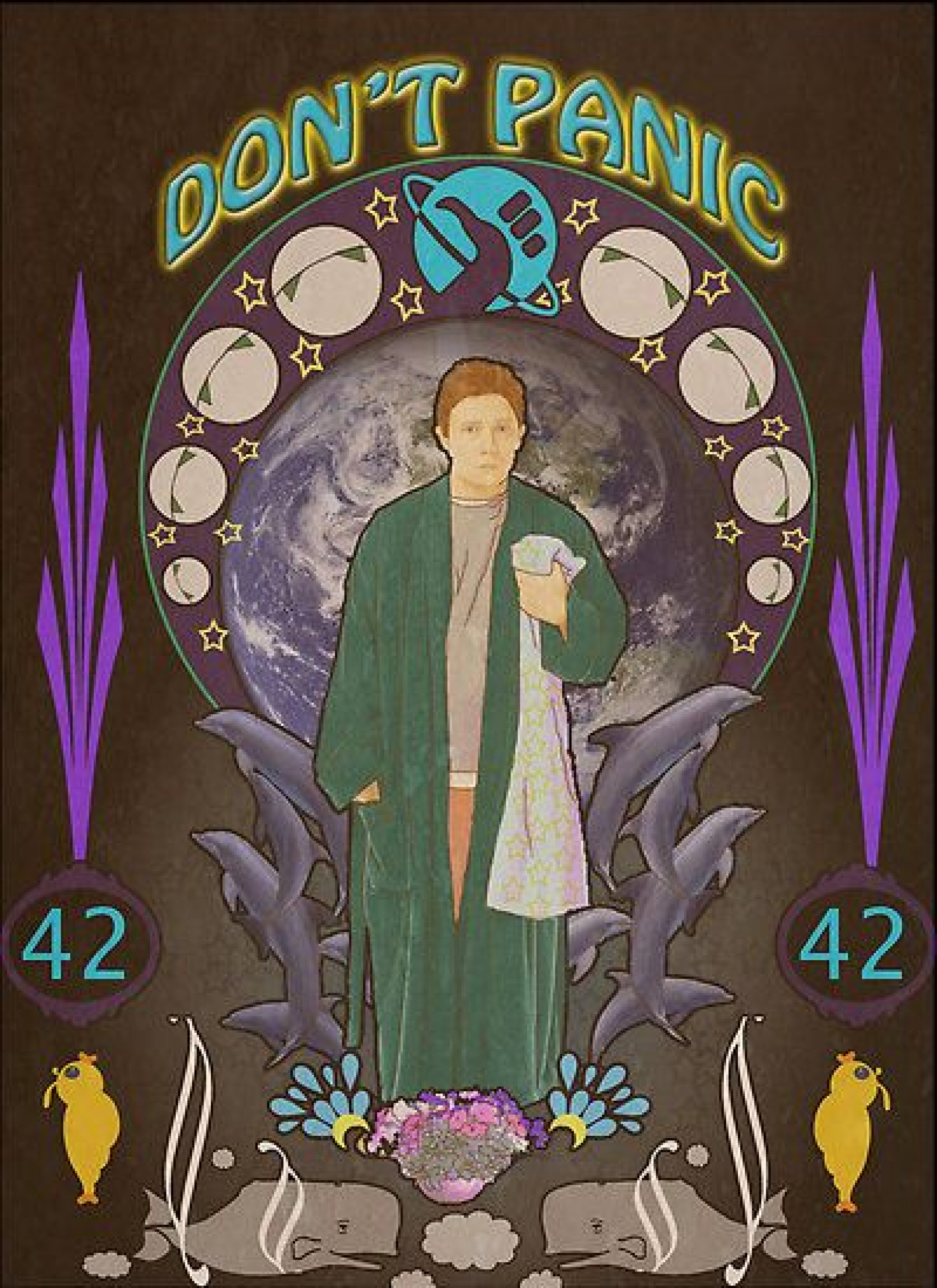 I wasn't into this book the first time I consumed it, but the second time around I started to tune in to all the hidden sarcasm and jokes. I listened to it on audio, and will likely read the series at some point. Having seen the original movie years ago, I went into the book with the impression that it was a silly nonsense story and didn't expect to like it. I was right about the nonsensical parts, but I was wrong about not enjoying the book. Adams was before his time when describing the actual guide. It had all the characteristics of today's Kindle ... here is website I found that makes a good comparison between the two: The Real Hitchhiker’s Guide to the Galaxy Has Arrived

I also was excited to find reference to a Dylan song ... "How many roads must a man walk down?" ... the perfect question to understanding the universe, life, and everything? what is the meaning of it all?
I am still trying to figure out the answer to the question ... why 42??

If we are honest with ourselves, I'm sure that we have all wondered on more than one occasion about the meaning of life, the universe and everything else? This question is what the book Hitchhikers Guide to the Galaxy is centered around. Douglas Adams, author of this classic science fiction comedy had an out-of-this-world imagination and if you aren't put off by the sarcasm and randomness of his story it is actually quite entertaining. Adams, a British writer, was known for nerdy humor, and actually his book started out as a BBC radio show in 1978. Following the book, the story was made into a film in 2005. I will agree with the majority of his fans that the book is definitely better than the movie. Admittedly, I did not follow the “rule” that most serious readers live by “read the book first.” So after viewing the film, I wasn't rushing to read the book. It certainly has some silly, weirdness that personally isn't my cup of tea. And speaking of tea … that is main character, Arthur Dent's favorite beverage … I'm sure it would be much more relaxing than a Pan Galactic Gargle-blaster. Then my friend Karen Moll convinced me to give the story, her all-time favorite, another go and actually read the book which is commonly referred to by its cult following as HG2G, or the Guide.

So before diving into my personal thoughts about the Guide, I will try to sum things up in a nutshell, to bring those unfamiliar with the story up to speed, as speedily as possible. And I will try not to spoil the story, or steal the discovery of its delightful surprises from you if you decide to read it for yourself. Arthur Dent wakes up one morning to find his house about to be bulldozed in order to clear the path for a new through-way. Along comes Ford Prefect, an alien mentor of some sort, who convinces Arthur to hop a ride with the Vogon, who are on their way to destroy Earth. It is highly crucial to bring along a towel; which Ford remembers to tell Arthur as they escape aboard a yellow spaceship (huh? same color as the bulldozer that came to flatten his house). The Guide says a towel “is the most massively useful thing an interstellar hitchhiker can have … you can wrap it around you for warmth … lie on it … use it as a sail on a mini-raft … wet it for use in hand-to-hand combat … wave it as a distress signal in emergencies … and of course use it to dry yourself off, if it still seems to be clean enough.” Ford also explains that the Earth is being destroyed in order to build a new intergalactic bypass. This is where the story takes off with series of madcap adventures, but luckily Arthur has an electronic guidebook, given to him by Ford, with the words “Don't Panic” written on the front. Whoever said losing your planet is the end of the world?

Within this story readers will shake their heads at the comic absurdity of everything, be amazed by scientific discoveries in a fictional galaxy, explore alternate ways of communication, appreciate, or not, alien forms of art and culture … do not let a Vogon read you poetry! And, most surely make comparisons between politics in space and that of the world as we know it. This book is the first in a trilogy of five novels, giving a whole new meaning to the word trilogy. On finally reading the book I can see why Karen enjoys it so much, I found it was certainly an escape from ordinary life, and made me wonder about many things. Mostly about the philosophical meaning of life. When the number 42 is declared the answer to everything, Arthur isn't the only one who is stumped. It seems that while in search of answers, this one in particular, the question is often overlooked. That is when the ultimate question is revealed as “How many roads must a man walk down?”

As a fan of Bob Dylan and his work, I reflected on this iconic question. How many roads, highways, intergalactic bypasses do we travel throughout our lives? Symbolically this could represent different time frames or lessons we undergo along our own individual journeys of human existence. Deep Thought, the giant super computer built by pandimensional beings in this story, confesses that the answer really must take 7.5 million years to be fully realized. But despite the extravagance of this story's comedy, it gave me something to consider. No matter what the answer is our life, our universe, our everything, is really what we make of it day by day, moment by moment. Don't panic, don't be afraid to live, and don't be afraid to travel unknown roads. There is much to discover along the way!

In tribute to Douglas Adams, who sadly died of a heart attack in 2001, his memory is honored every year on May 25, internationally known as Towel Day. Fans of Douglas Adams's work celebrate by conspicuously carrying along a towel all day as a talking point to encourage those who have never read HG2G to go pick up a copy. There are events all over the world from Australia, France, Germany, Israel, Norway, Poland, the UK and USA to name a few locations. Parties with the featured beverage a Pan Galactic Gargle-blaster, bad poetry readings, hitchhiking expeditions (always stop for towel carriers on May 25, they are harmless), and even charity drives to save the dolphins (the Galaxy's second most intelligent lifeform, next to white mice). One event I thought was quite nice was a used towel drive to collect bedding for animal shelters.

Wilkes Library will be celebrating with a NEW (not used) Towel Drive.  We are accepting towels of all sorts; bath towels, hand towels, kitchen towels, paper towels, etc . . . for donation to the Wilkes County Catherine H. Barber Memorial Homeless Shelter.  Check out the library website for other related Towel Day activities.

More in this category: « Programs to Empower and Explore, Both Online and at Wilkes Library Wilkes County Public Library Invites You to Join the Summer FUN! »
back to top